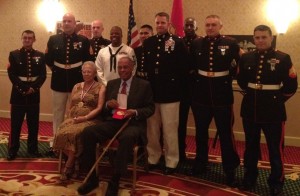 The event decor included World War II Marine posters that we reprinted and mounted and placed around the room to honor Eddie.  We rented an American Flag and a Marine flag for the podium.  10 Marines attended for the ceremony along with the Jefferson extended family.  Special Edward Jefferson “United States Marine Candy Bars” with information about Montford Point were at each place along with an American flag for everyone.  The American flag was the theme, of course, with napkins, dessert plates and favors to match.

70 years ago when these black Marines enlisted, there were still Jim Crow laws in the South. It was 1942 and the height of World War II. President Franklin Roosevelt had ordered the military to enlist blacks the year before. The Marines were the last service to do so. At first they were only allowed to provide supplies on the front lines. Eventually, they fought side by side with those white Marines when those iconic battles turned tough. Later they broke barriers together back home.  For the 400 survivors honored with the Congressional Gold Medal, who were once unequal, today they are beyond equal.

Let us help you plan your next party or event.
Hawaiian Summer Party for National Interstate Halloween Photo Op for the Browns Backers
Scroll to top